A wave of termite infestations is here as the current humid and humid weather is a perfect catalyst for its spread, exterminators warn.

They appear on the streets and in the houses of the residents and frighten many.

“The nightmare is back,” said a local resident named Xiong, who lives in an old house in downtown Jing’an Temple.

“One of the last night dozens of the bugs showed up in my house and it was a real fight,” she said. “I was home alone and desperately chased them away with a mosquito swatter. The sound is like a fireworks being set off.”

“They are gross and I filled in the gaps in the windows with paper to keep more from flying into my house, but they fidgeted and tried to get back in,” she added. “I was almost scared to cry. It really is a terrible experience.” 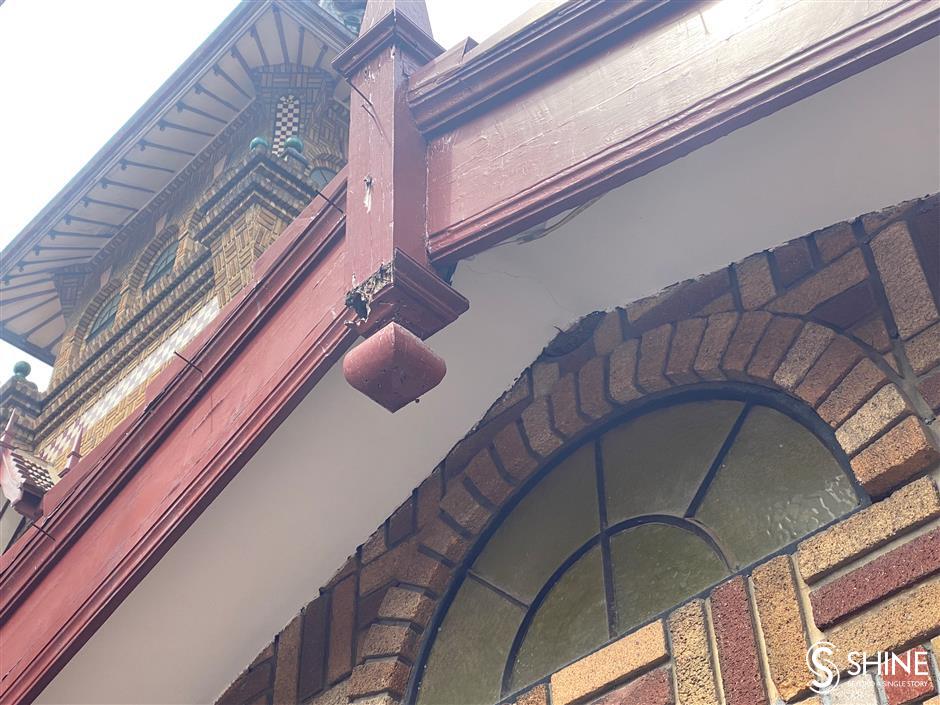 The wooden column in front of Villa Moller is corroded by termites.

The Moller Villa, a famous historical building in Shanghai, is attacked by termites every year.

“Termites often appear from March to June, give way in July and August, and return in September,” said Zhang Lei, who heads the quality department at Moller Villa. “But this year they didn’t appear until mid-May because we learned from previous years and did some protective work in advance.”

The Moller Villa, built in 1936, is a colonial mansion full of wooden structures that is now a hotel of the Hengshan Group.

“We look for traces of termites and examine their nests an average of four times a month, more often during the rainy season,” said Zhang. “We have to kill them as soon as they appear to avoid permanent damage.”

“Termites like to fly out at night and you can see large numbers of them flying around lights,” he added. 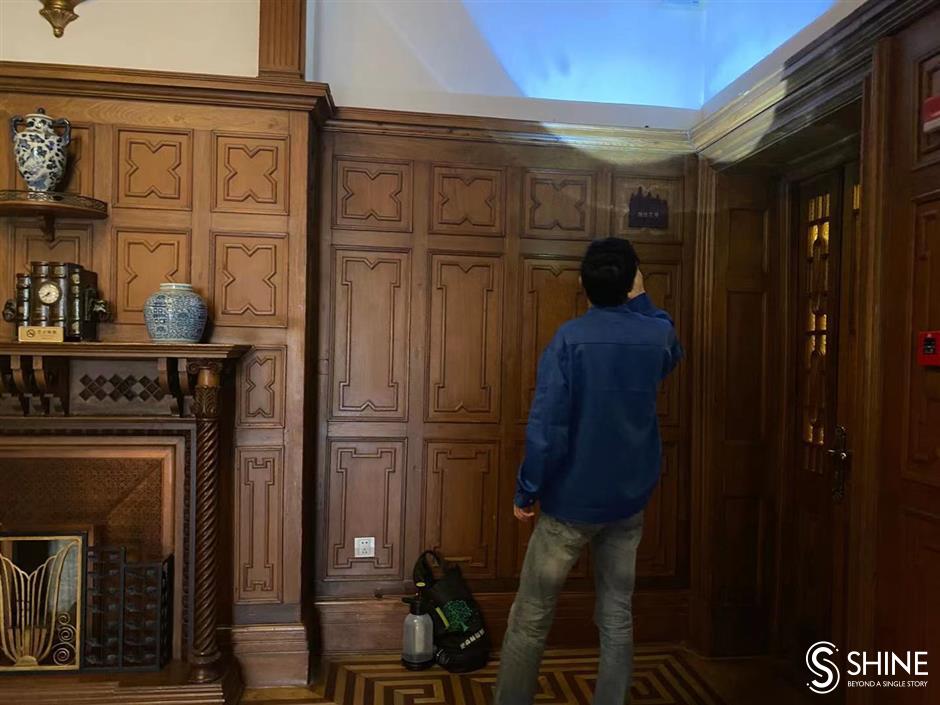 An exterminator searches for termites in the wooden parts of the Villa Moller.

Song Weibin, an exterminator with Shanghai Hygiene Pest Control Company who is in charge of termite prevention at Moller Villa, said the termite problem in Shanghai has been more serious lately than in previous years.

Song checked the hotel’s wooden structures for termite damage by knocking on the boards and pillars.

“Termites are more focused on sidewalk trees this year,” he said. “We usually use powdered chemicals to contaminate termites, bring them back to the nest, infect other termites, and everyone dies.” 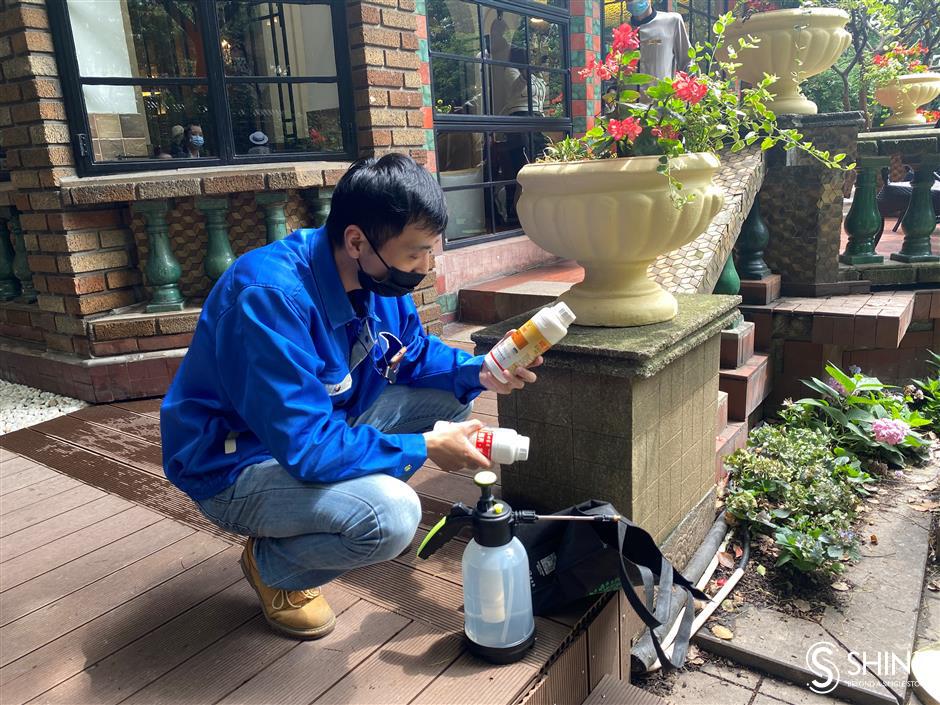 An exterminator checks the chemicals that are used to kill termites.

Street trees are the hardest hit area this year for termites, which are eroding and building nests.

There have been many reports of suspected termite nests on sidewalk trees and the green belts of public areas affecting nearby residential complexes.

Termite infestation in some of the city’s protected historical areas and buildings has moved into focus, according to the report.

A historic building on Huashan Road in Jing’an District was attacked by termites. A termite nest was discovered in the corner of the building’s stairs.

Xufang Greenery and Termite Control Center told Chinese newspaper Jiefang Daily that the areas with old buildings with brick and wood structures are more likely to attract termites to build nests and breed.

Shanghai Greenery Management Station said it was spraying for termites on street trees, experimenting with chemicals and other agents to control them, and using technology to track their nests.

Old wooden houses are the creatures’ favorite abode, and Yongjia Road, Jianguo Road, and Huaihai Road M., which house a large number of old wooden structures, are some of the hardest hit areas, according to Greenery Management Station.

“The extreme high point is around the plum rain season (a period known for humid, humid weather in June and July) as termites prefer a humid environment,” said Zhu Chungang of Shanghai Greenery Management Station. “They are most active between 7pm and 9pm and are attracted to light.”

“The beetles also kill trees, which are hollow inside due to the insects and can topple over in windy weather, affecting people’s safety,” he said. “They build nests in large trees and thrive on the wood.”

The green area management station announced that it would soon conduct a city-wide investigation into the damage caused by the insects to the residents and work out appropriate solutions.

The city’s property management company has published a list of 54 professional termite prevention and control agencies that residents can turn to for help.

Barrier strips can be attached to the cracks in doors and walls, and wood and packaging brought in from outside should be carefully checked.

Instead of moving or destroying termite nests themselves, people should seek help from professional agencies. 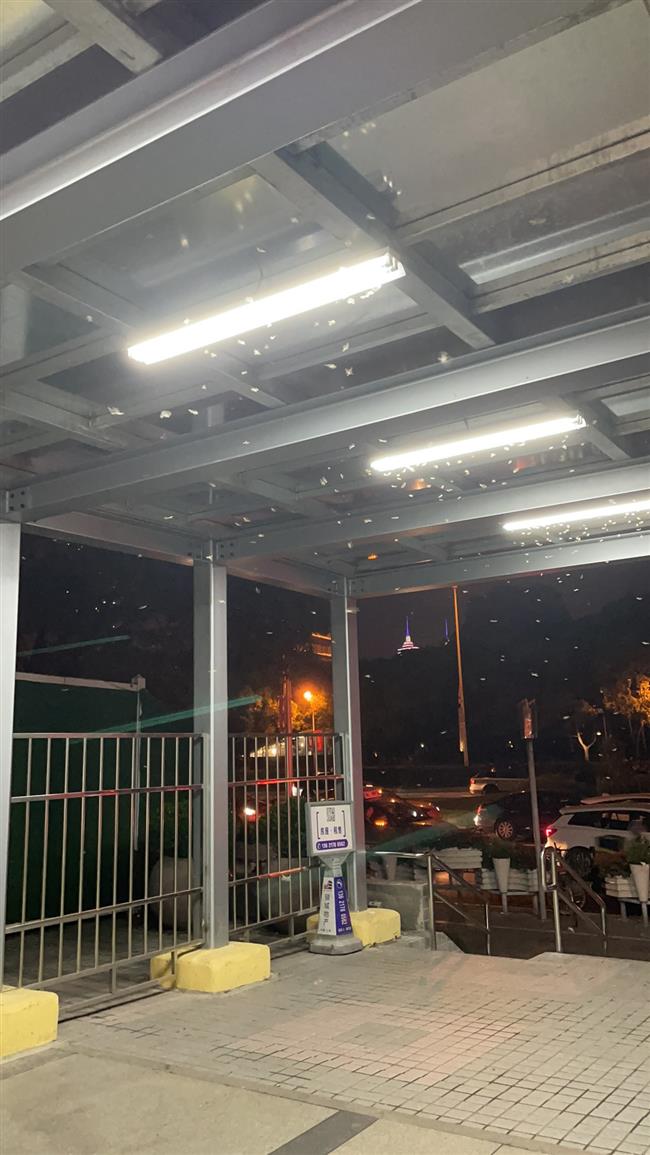 Termites fly at the entrance to the Zhongshan Park station on Metro Line 2.

Beware! Termites are at full strength and pest experts explain how to control them

Piranesi and the British termite structure

SMMUSD board feels the heat of the termite treatment