The Research Brief is a short version of interesting scientific work.

Neuroplasticity – the ability of neurons to change structure and function in response to experience – can be turned on and off by the cells that surround neurons in the brain, according to a new study on fruit flies that I co-authored.

As the fruit fly larvae age, their neurons change from a highly adaptive state to a stable state and lose their ability to change. During this process, support cells in the brain called astrocytes envelop the parts of the neurons that send and receive electrical information. When my team removed the astrocytes, the neurons in the fruit fly larvae remained plastic longer, suggesting that astrocytes are somehow suppressing a neuron’s ability to change. Then we discovered two specific proteins that regulate neuroplasticity.

The human brain is made up of billions of neurons that form complex connections with one another. Flexibility in these connections is an important factor in learning and memory, but things can go wrong if not strictly regulated. In humans, for example, too much plasticity at the wrong time has been linked to brain diseases such as epilepsy and Alzheimer’s. In addition, reduced levels of the two neuroplasticity-controlling proteins we have identified are associated with an increased susceptibility to autism and schizophrenia.

Similarly, removing the cellular brakes on plasticity in our fruit flies permanently impaired their crawling behavior. Fruit flies are of course different from humans, but their brains work very similarly to the human brain and can provide valuable insights.

An obvious benefit of discovering the effects of these proteins is their potential to treat some neurological disorders. But since a neuron’s flexibility is closely related to learning and memory, researchers could theoretically be able to increase plasticity in a controlled way to improve cognition in adults. This could, for example, enable people to learn a new language or a new musical instrument more easily. 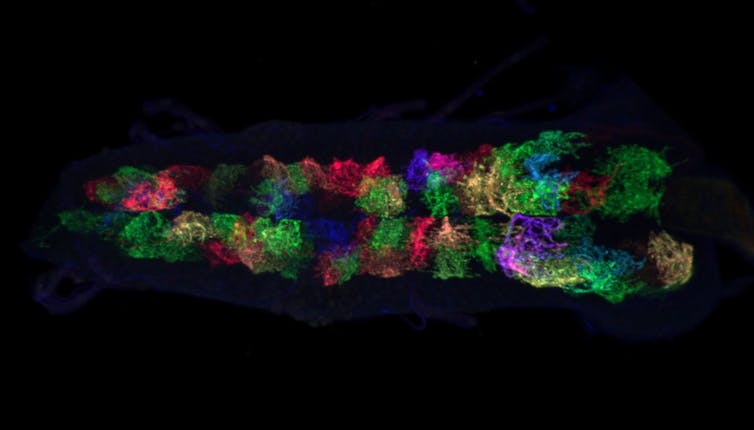 In this picture, which shows a developing fruit fly brain on the right and the nerve cord attached to it on the left, the astrocytes are marked in different colors, which shows their wide distribution among the neurons.
Sarah DeGenova Ackerman, CC BY-ND

How we did the job

My colleagues and I focused our experiments on a specific type of neuron called motor neurons. These control movements such as crawling and flying in fruit flies. To find out how astrocytes controlled neuroplasticity, we used genetic tools to turn off certain proteins in the astrocytes one by one and then measure the effect on motor neuron structure. We found that astrocytes and motor neurons communicate with each other through a specific pair of proteins called neuroligins and neurexins. Essentially, these proteins act as switches off the plasticity of motor neurons.

Which is not yet known

My team discovered that two proteins can control neuroplasticity, but we don’t know how these clues from astrocytes cause neurons to lose their ability to change.

In addition, researchers still know very little about why neuroplasticity is so strong in younger animals and relatively weak in adulthood. In our study, we showed that lengthening plasticity beyond development can sometimes be detrimental to behavior, but we also don’t yet know why.

[Understand new developments in science, health and technology, each week. Subscribe to The Conversation’s science newsletter.]

I want to investigate why longer periods of neuroplasticity can be harmful. Fruit flies are great study organisms for this research because it is very easy to alter the neural connections in their brains. In my team’s next project, we want to find out how changes in neuroplasticity during development can lead to long-term behavior changes.

So much remains to be done, but our research is a first step towards treatments that use astrocytes to affect how neurons change in the mature brain. When researchers understand the basic mechanisms that control neuroplasticity, they are one step closer to developing therapies to treat a wide variety of neurological disorders.

To learn more about Sarah DeGenova Ackerman’s research on fruit flies and neuroplasticity, tune in to this episode of The Conversation Weekly podcast.