Best Rat Poison 2021: Our Pick Of The Most Effective Methods To Treat Rat Problems

You’ve heard the scratching at night, found food packaging and masonry chewed, and feces built up in certain areas of your home, garden, or business premises. Everything points to an ugly conclusion: you have rats.

Here it is important to act decisively – and quickly. Rats can transmit a number of diseases that can be transmitted to humans, including leptospirosis or Weil’s disease, salmonella, listeria, Toxoplasma gondii, and hantavirus, and can cause fires by gnawing electrical cables. According to the British Pest Control Association, based on research by the insurance sector, it is estimated that rodent damage to cables is responsible for 25% of all electrical fires in buildings.

Rats can cause several problems in the home and are also aggressive. In addition, the Prevention of Damage by Pests Act 1949 requires property owners to keep rats and mice free of property or, if rats are a health or property hazard, to report infestation to local authorities.

Depending on the extent of your infestation problem, you may be able to solve it yourself, but you will need to seek the invaluable professional-grade help of one of the freely available rat poisons on the market. Here, we’ll walk you through the different poison types available and suggest some of the best options for each type.

READ ON: These are the best mosquito repellants you can buy

How to choose the best rat poison for your needs

What should I look for in a rat poison?

There are several varieties of highly potent chemical poisons legally available in the UK, each of which is mixed into either waxy or grain based baits to stimulate a rat’s appetite. Some variants kill much faster than others, but tend to cost more due to their potency.

Whichever you choose, however, they must be used in conjunction with lockable, tamper-evident bait stations (or boxes) to be legal in the UK. It is important to keep rat poison out of the reach of people, pets, and other wildlife. So don’t be tempted to just spread the bait loosely on the ground.

We’ve looked at some of the best examples of each of the most widely used and professionally recommended types here. All of them guarantee excellent elimination results so it really comes down to personal choice and budget.

How do I use rat poison with a bait box?

The method is really quite simple – secure your poison in the bait station and strategically place it on a wall where rat actions are visible. It’s important not to clean the area first: rats are intelligent and naturally suspicious of changes in their environment.

Rats tend to follow set routes. So, once you’ve identified these from evidence like falling or chewed masonry or wood (a rat’s front teeth keep growing, so they have to gnaw on things to wear off their teeth). They also prefer moving along walls for protection, so set your trap here.

Once the rat ingests your venom, it usually returns to its nest, where it dies. The length and number of feedings depends on the strength of your poison. For some, it can take up to 10 days while others can kill poisons within 24 hours.

All of the poisons recommended here are anticoagulants, which thin the rat’s blood so much that the heart can no longer handle the pumping, resulting in a sudden heart attack. As cruel as that sounds, it is actually a quick, relatively painless death.

Is rat poison dangerous to humans?

All rodenticides can be toxic to humans if swallowed, inhaled or touched. Avoid contact as much as possible, wear gloves when handling, and always secure it from where it can be accessed by children and pets. Always take the time to read and follow the manufacturer’s instructions.

READ ON: Handle these top gardening gloves with care

The formulation is irresistible to rats and is made from high quality whole grains for instant effects. Unlike other rat poisons that rely on multiple feedings, Formula B + kills the first time.

Served in 10 x 100 g bags, Formula B + must not be left in places where children or animals can get due to its strength. Don’t be tempted to just scatter it around: it is imperative to use it in conjunction with a secure, lockable rat bait box, and it’s important that it is kept away from prying little fingers (or paws).

Its effectiveness makes it suitable for both indoor and outdoor use, be it in homes, factories, farms and restaurants. When fast-acting, uncompromising poison is required, Pest Expert Formula B + is the right choice. 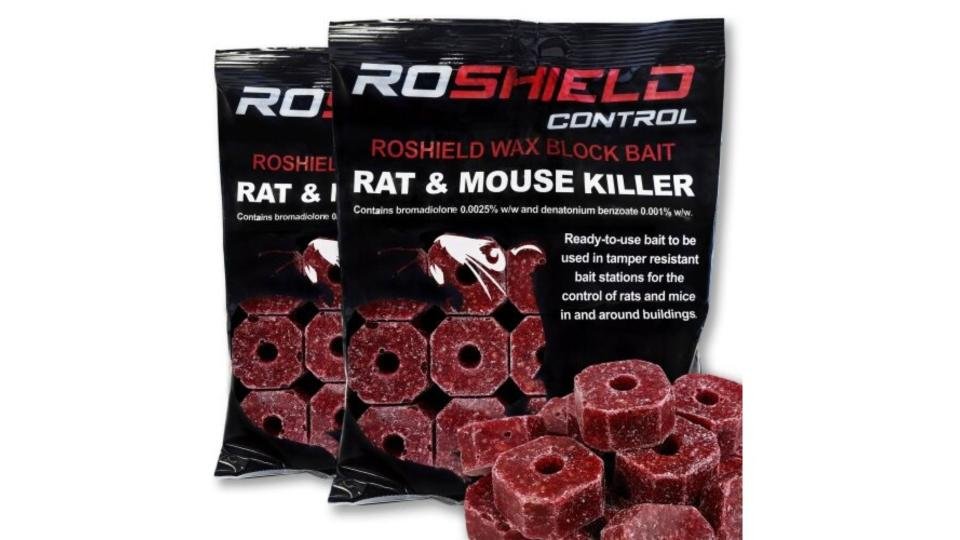 Roshield’s Wax Block Bait is a popular professional-quality choice for use in lockable bait stations. It uses a formula of culinary-grade wheat flour mixed with chopped wheat, other grains and proteins, all linked together through edible waxes. This intoxicating blend exudes a unique chocolaty aroma that rats don’t seem to be able to resist.

The main toxic ingredient here is bromadiolone, a powerful anticoagulant that prevents the rat’s blood from clotting and, unlike some rat poisons, is strong enough to kill with a feed instead of spending several days at bait stations.

Roshield bait is suitable for domestic and commercial use and is easy to use. Just secure it in a bait box, stand the box on walls indoors or outdoors where rat activity is known, and the rats inevitably take the bait and return to their nest to die. Job done.

Buy it from OnBuy 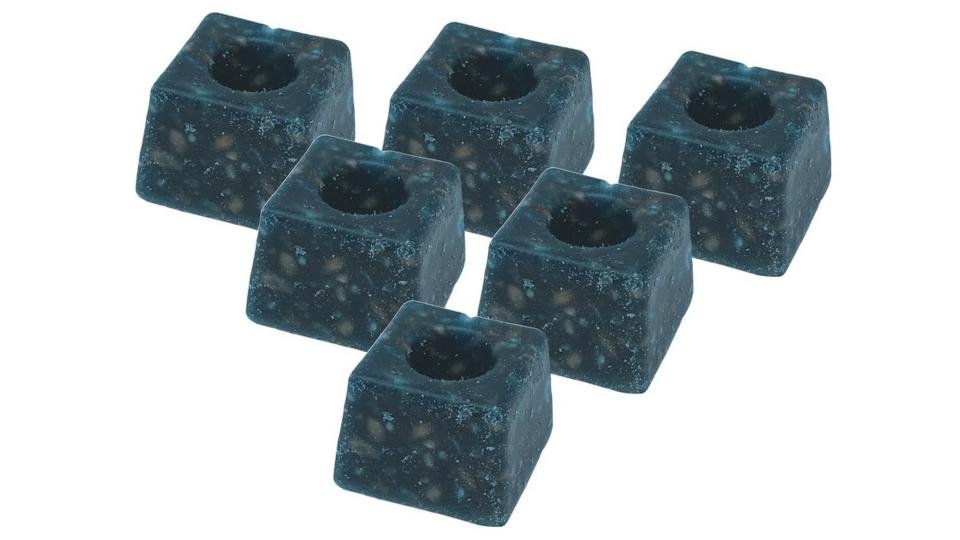 The active ingredient in The Big Cheese’s Block Bait is Difenacoum, a chemical compound that has kept the rat population down since the 1970s. Similar to other poisons, this compound is a slow-acting anticoagulant that is known to attack several key organs as it works.

Price is a big selling point: the All Weather Block Bait costs under £ 7 for 30 blocks. It works with all tamper-evident bait stations and can be used both indoors and outdoors as the moisture-resistant chemical formula keeps mold and fungal growth at bay while remaining very palatable to rodents.

It doesn’t work as quickly as Brodifacoum or Bromadiolone – Difenacoum can take up to 10 days to kill rats – but once ingested, the process starts immediately, so it’s slow but effective.

It is still dangerous to people and pets, so it must be kept safe and secure. It is also highly toxic to aquatic organisms and should therefore be kept away from ponds and disposed of in an environmentally friendly manner. 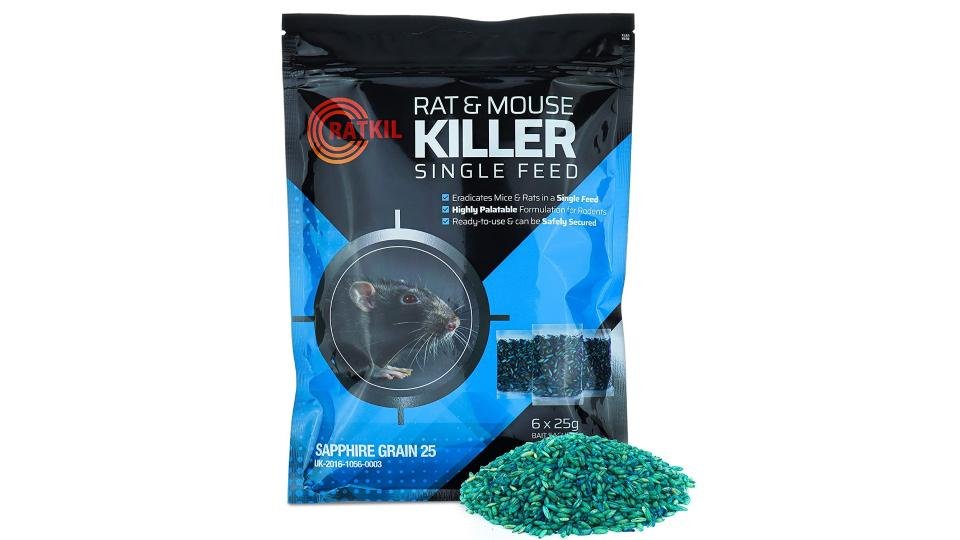 If you want the rat eliminating power of Brodifacoum without paying the premium on Pest Expert Formula B +, then Ratkil is a cheaper option.

Rat poison containing Brodifacoum is the most potent that you can legally buy in the UK, so you can be sure that rats will be eliminated from a single feed. As with the other baits featured here, Ratkil is made from a formulation that rats find very appealing.

Of course, you get fewer Brodifacoum-based pellets at this price than other options available here (6x 25g), but that’s enough to kill 40 rats so one bag might be enough. If you have a more serious infestation, you should still consider going the route of professional exterminators.

As always, a lockable, tamper-evident bait station must be used in conjunction with the Ratkil. And as always, it’s important to keep unused bait safe and away from children and animals.

22,000 traps and 40 tons of poison are not enough to eradicate the rat infestation on…