Jasmine Hardy talks about all the struggles her family has been through in their Buffalo apartment on Monday, Jan. 31, 2022. Robert and Jasmine Hardy are living with their three children – ages 16, 7 and 3 – in a home infested with rats and roaches Their landlord, who lives in the Bronx, has been cited by the City of Buffalo for code violations. 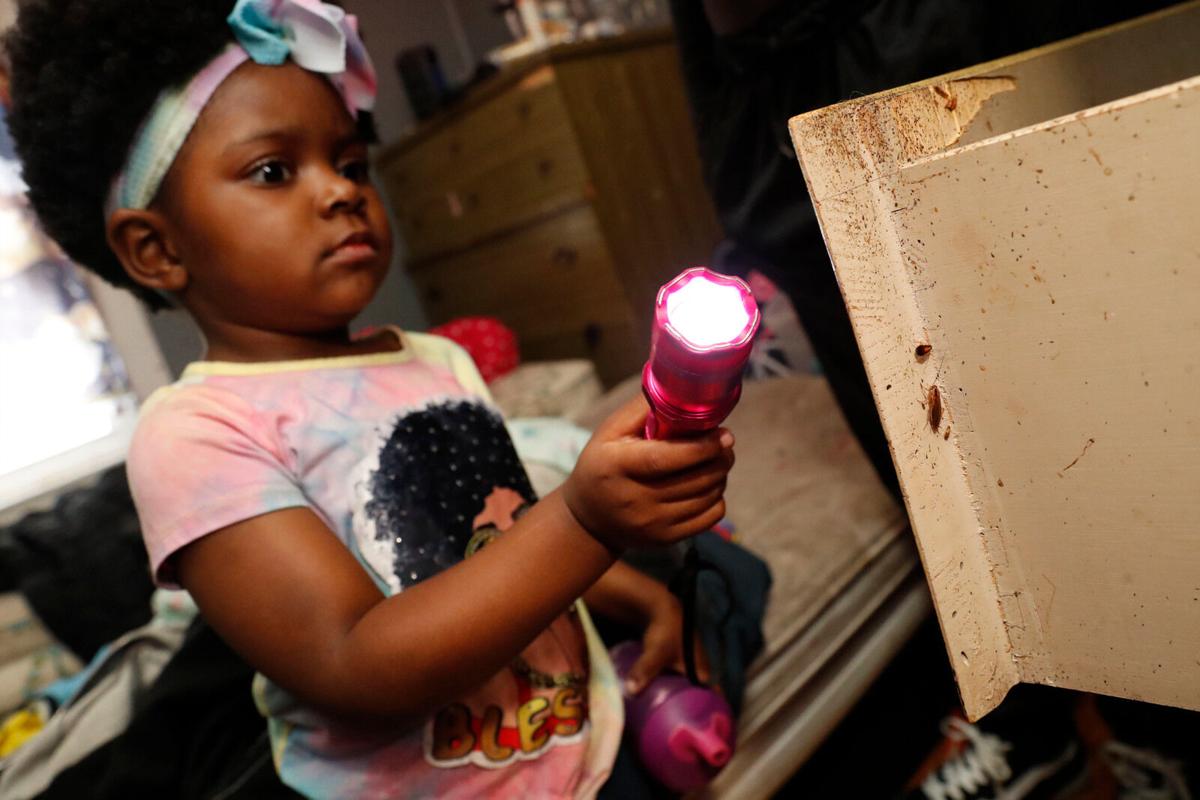 Janelle, 3, looks at two cockroaches on the side of Briyana’s dresser drawer, Monday, Jan. 31, 2022. When she sees a cockroach, she calls it a mouse and her mother says she tries to kill them. Briyana, 16, keeps all the clothes she uses in plastic bags and plastic bins. Robert and Jasmine Hardy are living with their three children ages 16, 7 and 3 in a home infested with rats and roaches. 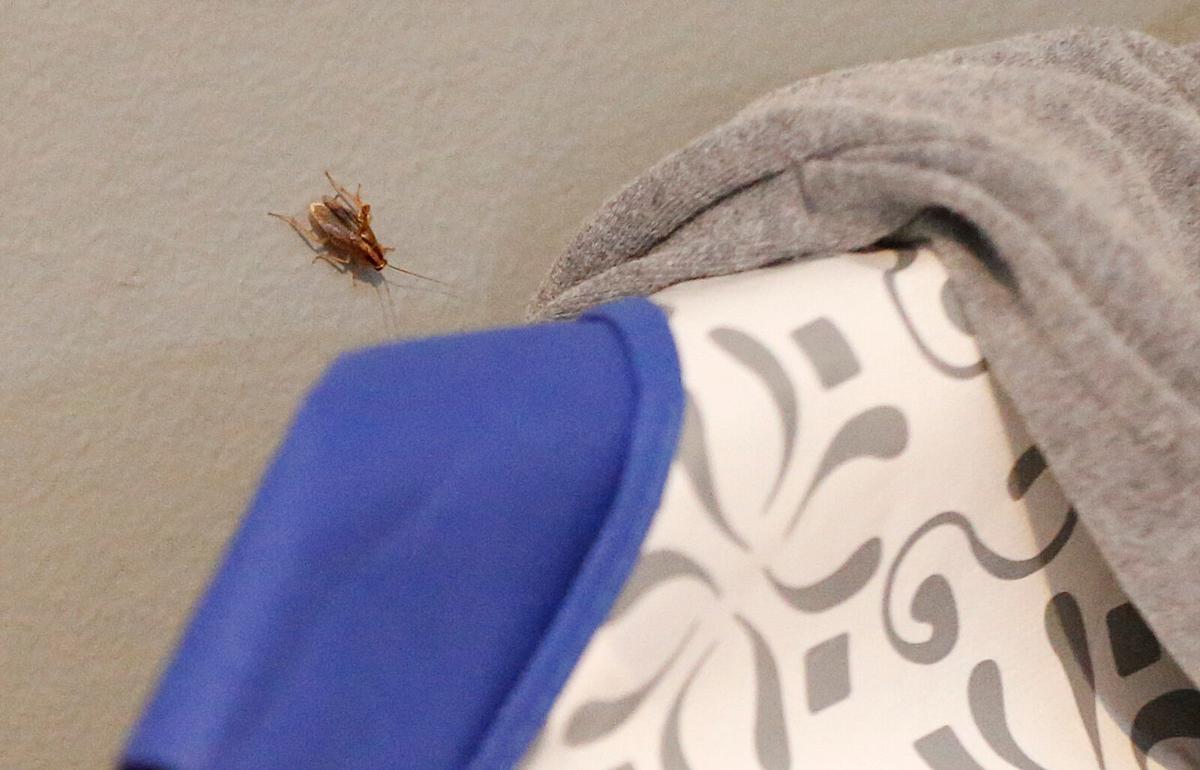 A cockroach crawls along the wall onto a pile of clean clothes in the dining room.

The Hardy family has been renting the downstairs of a house on Floss Avenue on Buffalo’s East Side for nearly two years. For much of that time, they say, the home has been infested with cockroaches and rats.

“We have rats the size of kittens,” said Jasmine Hardy, standing in her living room on a recent morning with her three children. “If we stay out here and be quiet long enough, they will come from out of the kitchen.”

Jasmine Hardy wants the landlord to take care of the rat and roach infestation, as well as many other problems at her Buffalo home where she lives with her husband and three children.

When housing activists make their case for why they feel city and state housing laws need to be strengthened, they point to tenants like the Hardy family.

City health inspectors cited their landlord for the rodent infestation and fire code violations on Wednesday. But the family – who stopped paying rent 10 months ago because the landlord did not rectify the rat and roach problem – is likely to be evicted now that the state’s Covid-19 pandemic eviction moratorium has expired.

There are two cockroaches and cockroach feces on the side of the lamp standing in the living room of the home of Jasmine and Robert Hardy. It’s normal to open a drawer and see a cockroach scurrying for cover.

“We get calls like this all the time. It’s incredibly common,” Teresa Watson, housing justice organizer at the Buffalo nonprofit group People United for Sustainable Housing, said of the rats. “This is a chronic issue across the city.”

Watson said PUSH Buffalo expects “thousands” of tenants to be evicted in the coming months now that the moratorium is over.

Robert and Jasmine Hardy are living with their three children, ages 16, 7 and 3, in a home infested with rats and roaches. There are many other…

Jasmine Hardy played a video for a reporter of one of the rats crawling on top of the family’s mini-fridge, nosing around in search of food. She now keeps most of the family’s food in plastic storage totes. Each morning, she sweeps rat drops out of the house before Briyana, 16, James, 7, and Janelle, 3, get up.

“I’m a germaphobe,” Jasmine Hardy said. “It drives me nuts. I don’t eat half the time. I don’t want to. It’s disgusting.”

The family stopped paying $750 per month to their landlord to protest the living conditions, she said.

Jasmine Hardy videotaped a rat looking for food in her kitchen during the day in October 2021. She and her husband have been trying to get the landlord to take care of the problem for over a year.


“I told him, I’m not paying y’all nothing until you stop rats from coming into my house,” Jasmine Hardy said.

Ratna Akhter, of the Bronx, owns the home, property records show. He purchased the property in 2019 for $61,000, according to property records. Akhter said the Hardy family owes him nearly $8,000 in back rent.

“This is a business,” Akhter said in a brief interview. “They’re not paying … If there’s a problem, then move.”

Akhter said he hired an exterminator for the property in November and made repairs to the foundation. He said the family is exaggerating the conditions and should pay their rent.

“I live in New York (City),” Akhter said. “I rent, too. I give every months’ rent. They are not paying, they are staying. That’s their problem.”

Janelle, 3, looks at two cockroaches on the side of Briyana’s dresser drawer. When she sees a cockroach, she calls it a mouse and her mother says she tries to kill them. Briyana, 16, keeps all the clothes she uses in plastic bags and plastic bins.

Fifty-nine percent of Buffalo residents are renters, Watson said, which is why PUSH Buffalo is pressing for the Buffalo Common Council to adopt a “Tenants’ Bill of Rights” as part of the city code.

The Council recently voted to support “Good Cause Eviction” legislation pending in the State Legislature that would prevent landlords from evicting tenants without cause. Watson said she often fields complaints from tenants who say their landlord serves them eviction papers if they request repairs to the property.

“It’s completely legal and it shouldn’t be,” Watson said. “People have a right to a basic standard of cleanliness in their homes, and we do not ensure that.”

Tenants whose landlords do not make repairs can file a complaint with city building inspectors, make the repairs themselves, and deduct the cost from the next month’s rent, withhold the rent or take the landlord to court, according to Legal Assistance of Western New York.

Robert Hardy shows a pair of pants of his daughter’s that she just wore last week. Since then the rats chewed holes in them and tried to drag the whole pair of paints underneath the kitchen sink to use for a nest. He found the pants stuck halfway underneath the sink.

Akhter’s attorney recently sent a letter to the Hardys’ Floss Avenue home notifying the family that they have 30 days to vacate.

The Buffalo News followed the Hardy family during the height of the pandemic and published photo essays to show how the family was adapting to remote learning. But Jasmine Hardy said the family was embarrassed to admit at the time that they were living in such conditions.

City housing records show that since 2020, the Floss Avenue property was cited on two different dates for a total of seven housing violations, including debris and garbage in the rear yard and exterior surfaces that were not properly maintained.

Hardy said previous tenants of the upstairs apartment threw garbage out of the upstairs window into the backyard, which she suspects may have worsened the rodent problem. Akhter said he patched holes in the foundation to prevent rodents from getting in.

Robert moved a ceiling tile to reveal a sewer pipe that leaks onto them in the bathroom every time the upstairs tenant flushes the toilet. Instead of replacing the pipe, the landlord had putty put on the leak, which didn’t work.

After The News brought the housing conditions to the attention of Mayor Byron Brown’s administration, a housing inspector this week visited the property and cited Akhter for 10 housing violations.

Those violations, which included a furnace that was not repaired properly, missing smoke alarms and “signs of rodent and insect infestations,” will result in the city taking the landlord to Buffalo Housing Court, said Catherine Amdur, deputy commissioner of the city’s Department of Permit & Inspection Services.

“You could see the frustration on her face,” Jasmine Hardy said of the housing inspector. “She was like, ‘This is going straight to housing court.’ She said, ‘I’m so sorry.’ ”

Prior to that visit, Hardy said a city inspector came to the property and instructed the landlord to replace or fix the furnace – an expense that Akhter said cost him $900.

“I’m earning money here (in New York) and I’m putting money there (in Buffalo) for nothing,” Akhter said.

There’s a dead cockroach in the refrigerator. There are many other problems as well that have not been properly addressed by their landlord who lives in the Bronx.

Watson, of PUSH Buffalo, said expenses such as extermination and repairs are “just part of the cost of business that the landlord chose to run when you decided to rent out apartments.”

Hardy said an inspector from the Erie County Health Department also recently visited the property. A spokesman for County Executive Mark C. Poloncarz said county agencies could not provide information about recent inspections unless The News submitted a Freedom of Information Law request, which The News did Wednesday.

Watson said that is not surprising.

“The prices almost quadrupled in a decade locally,” she said of the rental market. “The pandemic has speeded up that increase, but it is a pattern that has been going on for a long time.”

PUSH Buffalo is encouraging families like the Hardys not to “self-evict” and leave their apartments without first contacting an attorney or filling out a tenant complaint form on the group’s website.

“They probably have more time than they think,” Watson said.

There are two cockroaches and what appears to be larva on the side of Briyana’s dresser drawer, Monday, Jan. 31, 2022. It’s normal to open a drawer and see a cockroach scurrying undercover. Briyana, 16, keeps all the clothes she uses in plastic bags and plastic bins. Robert and Jasmine Hardy are living with their three children ages 16, 7 and 3 in a home infested with rats and roaches.

But as 3-year-old Janelle wandered through the apartment with a flashlight looking for cockroaches, Jasmine Hardy lamented the fact that she and her husband would be on “rodent patrol” again that night.

“We stay up and watch the kids until they go to sleep, to make sure rodents and roaches don’t crawl on their face or their mouths,” she said.

Akhter said the eviction moratorium has left landlords like him without many options—and without the cash to make necessary repairs.

But the nightly routine—staying on guard for rodents as their children sleep—has left the Hardys exhausted as they fear eviction.

“I’m tired,” Jasmine Hardy said. “I just want them to take responsibility. Is it fair that I have to live like this? Is it?”

The smart way to start your day. We sift through all the news to give you a concise, informative look at the top headlines and must-read stories every weekday.

Tallahassee’s cold January has taken hum out of winter, except for carpenter bees

How cold temps in late March will impact insects this spring