A man in Ireland feared that he would lose his penis after incurring a nasty black widow spider bite, which caused a golf-ball-sized lump to sprout up perilously close to his private parts.

“I was convinced I would lose my penis,” Fergus Farrelly, 26, told SWNS of the fiasco, which began on Jan. 7, after he woke up with a painful, marble-sized bump in an unspecified spot near his member.

The construction worker, who was staying with his mother in Ulster at the time, said he initially dismissed it — but over the next few days, the world swelled in size until it was a little too close for comfort.

“When I woke up and saw this lump, I had no idea what it was — but it got larger and larger as days passed,” exclaimed the flummoxed fellow.

Farrelly finally decided to report to the emergency room at Cavan General Hospital on the advice of his girlfriend after the bump ballooned to the size of a golf ball and turned a disgusting shade of purple. However, doctors insisted that he needed to see a specialist and transferred him to the larger Beaumont Hospital in Dublin.

Farrelly said he’s lucky to be alive. Just hours after he arrived at the hospital, the cyst exploded. In order to prevent an infection, doctors hooked the poor patient up to an IV drip of antibiotics and also conducted blood tests to get to the bottom of the bite.Fergus Farrelly / SWNS

Unfortunately, just like Farrelly, the doctors had no idea what had caused the lump.

To make matters worse, just hours after Farrelly arrived at the hospital, the cyst exploded, leaving a massive crater near his penis, SWNS reported. In order to prevent an infection, doctors hooked the poor patient up to an IV drip of antibiotics and also conducted blood tests to get to the bottom of the bite.

“I was in hospital for days on all kinds of drips after the giant lump burst — that was when I thought I would lose my penis altogether,” lamented Farrelly. The Irishman added that the pain was so “unbearable” he couldn’t even walk or move.

Finally, after several agonizing days, Farrelly’s test results arrived. The patient claimed that they contained the toxin of a black widow spider, a venomous black arachnid identifiable by the red hourglass pattern on their abdomen.

Although rarely fatal, their venom contains a neurotoxin that can reportedly cause nausea, difficulty breathing and excruciating muscle cramps.

Interestingly enough, black widow spiders typically do not live in Ireland, so the patient may have been mistaking the culprit for a noble false widow, an invasive species with a less potent bite. 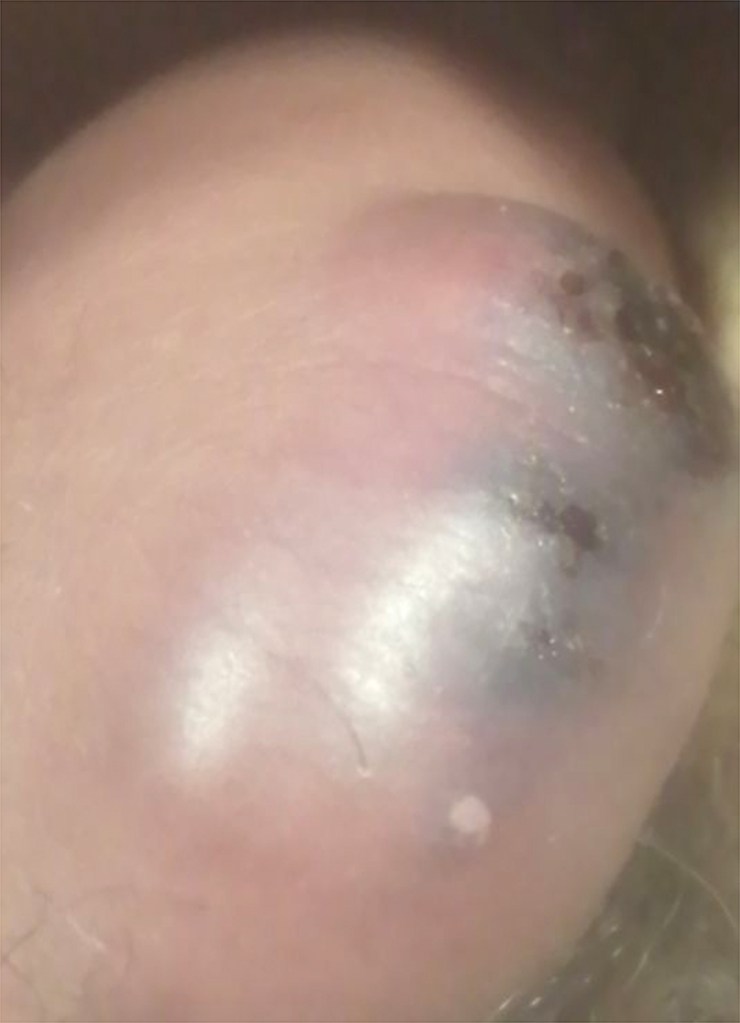 “I do find it a wee bit funny now because it is unusual,” he said. “But it’s also really scary — I had no idea what damage spiders could do.”Fergus Farrelly / SWNS

Either way, Farrelly says he’s lucky to be alive.

“I got told I would probably have ended up dead if it hadn’t burst in the hospital because it would likely have got infected,” the relieved bite recipient said. “They said the venom could have spread and poisoned my blood system.”

Instead, doctors were able to treat the wound with dressings after it burst, causing the pain to subside. Four days later, Farrelly was discharged, whereupon he had to take antibiotics for a month afterward.

“The pain didn’t ease properly until I had been home for around a week,” he said. “I’m up and walking again now, but it could have been so much worse.”

Farrelly has since returned to work, although he now sports a nearly one-inch battle scar.

Meanwhile, the incident has left him with a newfound respect for these diminutive venom dispensers.

“I do find it a wee bit funny now because it is unusual,” he said. “But it’s also really scary — I had no idea what damage spiders could do.”

In an even more frightening incident from 2020, a Thai teen had to be hospitalized after a python bit his penis while he was on the toilet.