When eight-year-old Sameer Shaikh complained of muscle pain in August, his uncle Chand, a 32-year-old carpenter who lived with him in Govandi, thought the child might be exercising a little too much that day.

However, when Sameer developed a high fever, his parents, who lived in Uttar Pradesh, asked Chand for a blood test. The test found that Sameer’s white blood cell (WBC) counts were dangerously low, which meant he had to be hospitalized immediately.

The first two hospitals that Chand took Sameer to could not accept him – there were no intensive care unit (ICU) beds available. Chand was finally able to admit him to the Lokmanya Tilak Municipal General (LTMG) hospital in Sion. But by then Sameer’s condition had deteriorated significantly.

“We don’t know how he got the infection and how his condition got worse so quickly,” Chand said later, recalling Sameer’s tragic death.

Sameer is among 70 people in Mumbai who have died of leptospirosis – a bacterial infection that spreads through the urine of infected animals such as rats and cattle – the highest monsoon-related death rate since 2015.

In comparison, 55 and 38 people respectively died of dengue and malaria – both mosquito-borne viral infections – in the same period.

Also read: Piles of trash: a different type of high-rise in Mumbai

In congested urban areas like Mumbai, rats are known to be the main source of leptospirosis in both humans and animals.

Dr. Radha Gulati Ghildiyal, director of pediatrics at LTMG hospital, said muscle pain is typical of leptospirosis. When children report this symptom along with a fever, doctors usually suspect leptospirosis or dengue as the cause. “Mortality is only observed in patients who come very late, typically four to five days after symptoms first appeared,” the doctor said.

Leptospirosis is caused by Leptospira bacteria that can enter the human body through cuts, abrasions, or open wounds. Cases typically occur during the monsoon season, especially after floods and waterlogging.

Overflowing sewers and poor hygiene often result in rat urine mixing with accumulated water that commuters have to wade into.

“Even a single life lost to leptospirosis worries us,” said Mumbai’s insecticide officer, Dr. Rajan Naringrekar, who is responsible for containing the rat population in the city.

At least 1,000 rats are killed in the city every day. The citizens’ authority hires rat killers who hunt and kill rats at night. At least 14 of the city’s 24 stations have rat killers on night duty. But the company’s mainstay is poison bait – poisonous wheat balls made from chemical compounds that rats feed on and die on.

The task of mixing the chemical compound with wheat flour is done by “rat workers”. The Municipal Corporation of Greater Mumbai (MCGM) has 137 such permanent employees who make this mixture on a daily basis and house the pellets throughout the city’s 24 boroughs. While rat workers cover their assigned areas on a daily basis, they are often asked to focus on areas where residents are complaining about the rampant rat threat. The work of the rat workers is monitored by junior overseers in each station.

The citizen body also mixes bromadiolone, a highly toxic rodenticide for mammals, with the flour; it uses almost 70 kg of it every year. During the monsoon season, the poisoned wheat pellets are often washed away when water floods the burrows.

Beware of the plague

The civil body must be vigilant of bubonic plague, a bacterial infection caused by the bite of an infected rodent flea that killed millions in what was then Bombay around the turn of the century.

The first official plague case was recorded in the city on September 23, 1896. The pandemic spread like wildfire as British authorities opened quarantine centers and flushed streets and houses with seawater to flush out rats that had overrun the city. The episode sparked a mass exodus and millions died of the plague in the years that followed.

There are currently no estimates of the rat population in Mumbai. But the insecticides division is sure the numbers haven’t increased. “If anything, we managed to keep the numbers on a plateau despite the growing traffic jams in the city,” said Naringrekar.

He attributes the plateau of numbers to a series of measures his department has taken to rid the city of rats. In Mumbai, around 300,000 to 400,000 rats are killed annually with these various interventions.

Getting your hands dirty

Every day at noon there are three tempi on a town house in Lower Parel with dead rats from all districts of Mumbai. Workers unload sacks of dead rats, count the numbers, and update a watchful log.

Once the count is complete, 34 year old lab technician Pravin Ghuge will step in. Armed with rubber gloves, a mask and a lab coat, Ghuge carefully fetches some dead rats from various stations and takes them to a room on the premises. He goes on to dissect a rat. He places a tiny piece of rat liver on a microscope slide. He stains the stain on the slide with a chemical solution and observes it under a microscope. He’s looking for a safety-pin-like appearance of Yersinia pestis, the bacterium that causes the plague.

Ghuge, who has a Master of Science degree in microbiology and has been dissecting rats as a laboratory technician since 2009, has seen no trace of the plague.

“It’s not exactly a great feeling to dig your hands through a bunch of dead rats every day, but it’s the job I’ve been asked to do and I have to do,” said Gughe. “That was my first contribution. I’ve asked for a change many times, ”said the resident of Thane, who is the father of a five year old. “My biggest fear is being exposed to infections myself and taking them home with me. There could be so many pathogens on the rodents that I could be exposed to every day. “

In some ways, Ghuge is an important barrier between the city and the deadly bacterial infection that once killed millions. He was assigned to dissect at least 10% of the daily collection of dead rats. But with just one screening technician, won’t it be easy to miss one infected rat in the thousands?

“You are less likely to miss an outbreak like this,” argued Naringrekar. “When the infection shows up, the first alarming signs will be a large number of rat deaths or what is known as a rat fall for no apparent reason or intervention. That would be our main signal, ”he said.

In an outbreak of disease, an unusually large number of rodents tend to die first when the infection spreads among them. The bacterium Yersinia pestis, which causes the plague, is found in rodent fleas that feed on rodents’ blood. After the rodents plagued by the plague die, the fleas turn to other hosts such as humans and other animals.

The Mumbai City Council uses a “4D formula” called by the department head to tackle rats: deny entry (rat-proof buildings, pipes), deny shelter (disorder, dispose of junk), deny food (dispose of rubbish correctly) and destruction ( Traps, poison baiting, fumigation, which is carried out under the supervision of the insecticide department).

“In areas like Nepean Sea Road and Malabar Hill, you rarely find rats other than in the sewers. That’s because all buildings are rat-proof and clean, ”says Naringrekar, who has worked in the insecticide division since 1989. 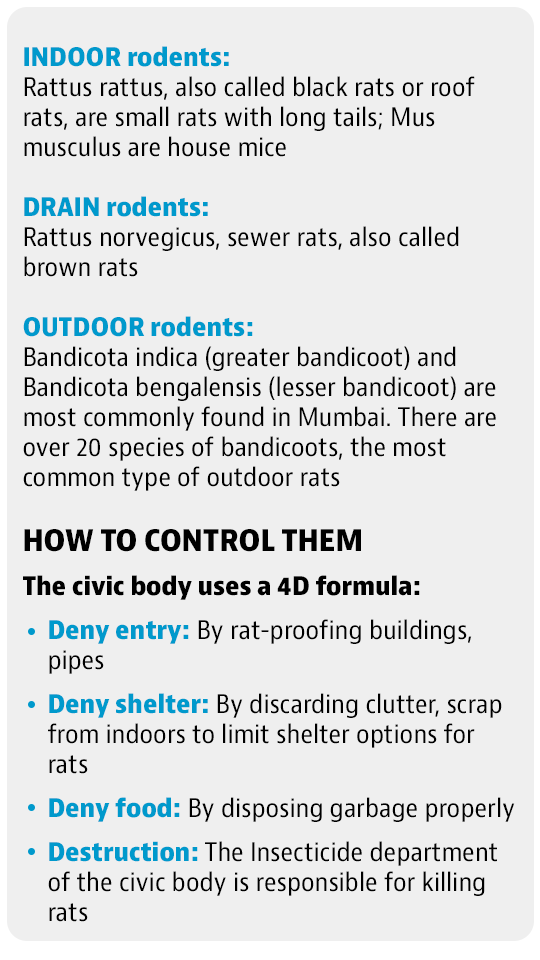 Rat repellent involves placing plugs (like a circular sheet of aluminum) on pipes going up an apartment building and sealing the gaps between the pipes and the structure itself so the rodents cannot climb up and enter people’s homes. The rat safety department has been carrying out this in all civic-run hospitals since 2019. The work in Kandivli’s Shatabdi hospital has ended and is currently continuing in the LTMG hospital. Next up is Nair Hospital.

“Unfortunately, public behavior is responsible for creating a conducive environment for rats to thrive. People give them plenty of food in the form of unclean premises, rubbish and arbitrary rubbish disposal. They offer them protection from the clutter that is piling up, ”said Naringrekar.

“Rats multiply at great speed. Their gestation period is only about 21 days and they have large litters – anywhere between six and 14, ”Naringrekar said, adding that while his department is working to ensure the rat population does not increase, a change in public behavior is the only thing Factor that can lead to a decrease in the number. “Cleanliness and hygiene are critical to keeping rats at bay.”

Diseases such as leptospirosis, malaria, gastroenteritis, hepatitis A and E, and dengue fever continue to thrive in Mumbai. According to the Brihanmumbai Municipal Corporation (BMC), these diseases have killed 173 people since 2015.

The citizenry runs awareness campaigns, such as putting up posters to warn citizens of leptospirosis and other diseases during the monsoon season. As for leptospirosis, the citizens’ group’s campaigns focus on taking doxycycline – the antibiotic that works against the infection – as a preventive drug when someone has waded through floods.

Sameer’s family still has no idea how exactly the child was infected. Tragically, his uncle blames himself for death.

“Doctors asked me if Sameer had run in the water. But I had protected him as I was responsible for his safety. He was playing with a couple of friends right in front of our house. He never got very far, ”said Chand. “I don’t think he came into contact with sewage.”

Mouse infestation calls for the Astoria Pizzeria to be temporarily closed